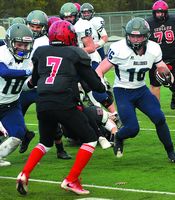 Glens Falls was simply too much for Cobleskill-Richmondville Saturday.
Playing at Shenendehowa, the Indians blanked the Bulldogs 40-0 behind four second-quarter touchdowns and a defense that never gave C-R breathing room in the Section II Class B championship.
The two teams met in the second game of the season at the Bulldogs’ field, and the Indians scored two late touchdowns to pull out a 36-28 victory.
Such fourth-quarter heroics weren’t necessary Saturday.
“They were a different team,” said Bulldog Coach Ed Hantho. “I think maybe they underestimated us the first time, and now they knew how serious we were.”
The Indians scored on their first drive, with Aalijah Sampson running it in from 29 yards out.
Momentum swung the Bulldogs way later in the first quarter when Alex Javitz intercepted a Glens Falls pass.
C-R moved the ball to midfield, but quarterback Donovan Pacatte fumbled on a play that looked like the ground knocked the ball loose. Refs gave possession to the Indians, however.
“That’s what the refs said, so what can you do?” asked Coach Hantho. “But that was gigantic for them. We were moving the ball, and if we scored there, it’s maybe a different game.”
Two plays later, Indian quarterback Joseph Girard III passed 46 yards to Trent Girard for a 14-0 lead.
C-R almost caught a break when Glens Falls fumbled a Bulldog punt later in the quarter. A C-R defender tried to pick up the loose ball but lost it to a Glens Falls player.
Cooper Montgomery then scored from nine yards out for the Indians, and quarterback Girard later ran for a 44-yard TD.
Just before the half, Joseph Girard III connected again with Trent Girard, this time for a 22-yard touchdown play. That made it 34-0 at the midpoint.
Glens Falls added a touchdown in the third quarter on a five-yard run by Joseph Girard III.
The Indians defense hounded Pacatte most of the game and pretty much shut down C-R’s running attack.
“They did a great job defending us,” Coach Hantho said.
He tipped his hat to Girard III, who’s headed to Syracuse to play basketball, as “a player who did what he’s done all year. He’s a great player.”
As are others on Glens Falls. For many of the Indians, this was their third consecutive trip to the Class B championship. This was the Bulldogs first trip since 2007.
Obviously disappointed in the outcome, Coach Hantho was bothered by Glens Falls’ winning margin. Even though the Bulldogs lost earlier to Glens Falls and Averill Park, those games were close.
“That’s never happened to us this year,” said Coach Hantho, whose Bulldog finished at 7-3.
“There was never a game that we weren’t in.”