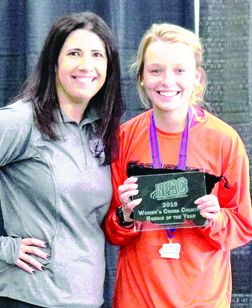 The North Eastern Athletic Conference (NEAC) has named SUNY Cobleskill women’s cross country runner freshman Ashley Kubat, Sloansville, Cobleskill-Richmondville High School, the conference’s “Women’s Rookie-of-the-Year.”
Kubat was the NEAC’s top finishing first-year runner at the 2019 NEAC Cross Country Championships hosted by SUNY Cobleskill, on Saturday.
She becomes the fifth Fighting Tiger female cross country athlete to earn NEAC “Rookie-of-the-Year” in program history.
The Cobleskill-Richmondville High School alumnus helped lead the Fighting Tigers to the 2019 NEAC Women’s Championship by placing second overall in the field of 74 runners, covering the hilly 6000-meter course in a time of 24:53.8.
Cobleskill posted a score of 26 points to win the team title by 54 points over their nearest rival at the meet.
During the regular season, Kubat was named the NEAC Women’s Runner-of-the-Week four times.
Kubat’s recognition by the NEAC brought with it high praise from SUNY Cobleskill Head Coach Mitch Tomaszkiewicz.
“Ashley over the course of the season has proved to be an extremely competitive individual on race day who works hard in practice on a daily basis,” said Coach Tomaszkiewicz.
“Beyond that she has shown herself to be a great teammate and an unselfish individual. She is a credit to her family and the Cobleskill-Richmondville running program.
“I would also have to point out that she is one of the key reasons we were able to win the conference this year without a doubt.”