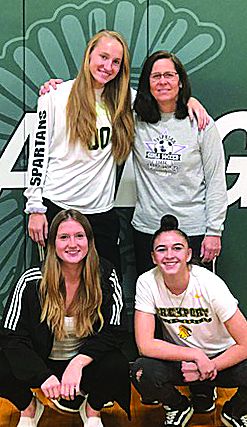 New York State’s Class C Coach of the Year is a hometown girl.
What’s more, her team didn’t even need to win the girls state soccer finals for Sue Herodes, a 1985 Middleburgh Central School graduate, to capture the honor.
“I was speechless,” Coach Herodes said, when she learned of the honor from a friend in an email.
“I emailed back ‘Me?’
“It’s something I will always cherish. This whole season, it could never happen again and I wouldn’t change a thing. I’m just so thankful.”
And more for her team, Unatego, where she’s taught and coached for 30 years, than being named the C’s Coach of the Year.
“They’re just a great group of girls,” she said, and they were as thrilled to finish second to Stillwater, 1-0, in the state finals than if they’d won.
“Honestly, I wouldn’t have felt any different if we’d won,” Coach Herodes said. “I was so proud of their composure and the way they fought to that last buzzer. We legitimately had opportunities to force the game into overtime.
“It’s not like some games where you know you’re overmatched…my kids just kept playing. I’ve never been prouder.”
Coach Herodes played on MCS’s 1983 championship team and has led her Spartans to 362 wins in her career.
“It’s been a good run,” she said. “Unatego is very much like Middleburgh. The school and community are very supportive and it’s a good fit.”
Heading into post-season play, the Spartans knew facing Stillwater, who’d they’d seen in the quarterfinals last year, was a possibility and they’d been keeping an eye on senior striker Brooke Pickett.
“We have a very good defense and we went in with the goal of keeping Brooke out of the net,” Coach Herodes said. “We didn’t disappoint, The game was back and forth…we had a couple of opportunities even with two minutes left.”
Unatego will graduate three of its senior starters in June, but Coach Herodes expects them to be competitive in 2020.
But as much as she’s looking forward to that, she’s still celebrating this year’s record and her own honors—and what they really mean.
“I love to coach,” she said. “The girls make me laugh. I want them to have the best experience possible…to learn what they’re supposed to learn from athletics. How to win…how to lose. How to deal with adversity. It’s not just competing and it’s not just winning.
“Even at the finals, when we lost, I got a ton of accolades over how they presented themselves on the field. For me, that’s what it’s all about and I have to think it had a lot to do with my honor. I couldn’t ask for anything more.”