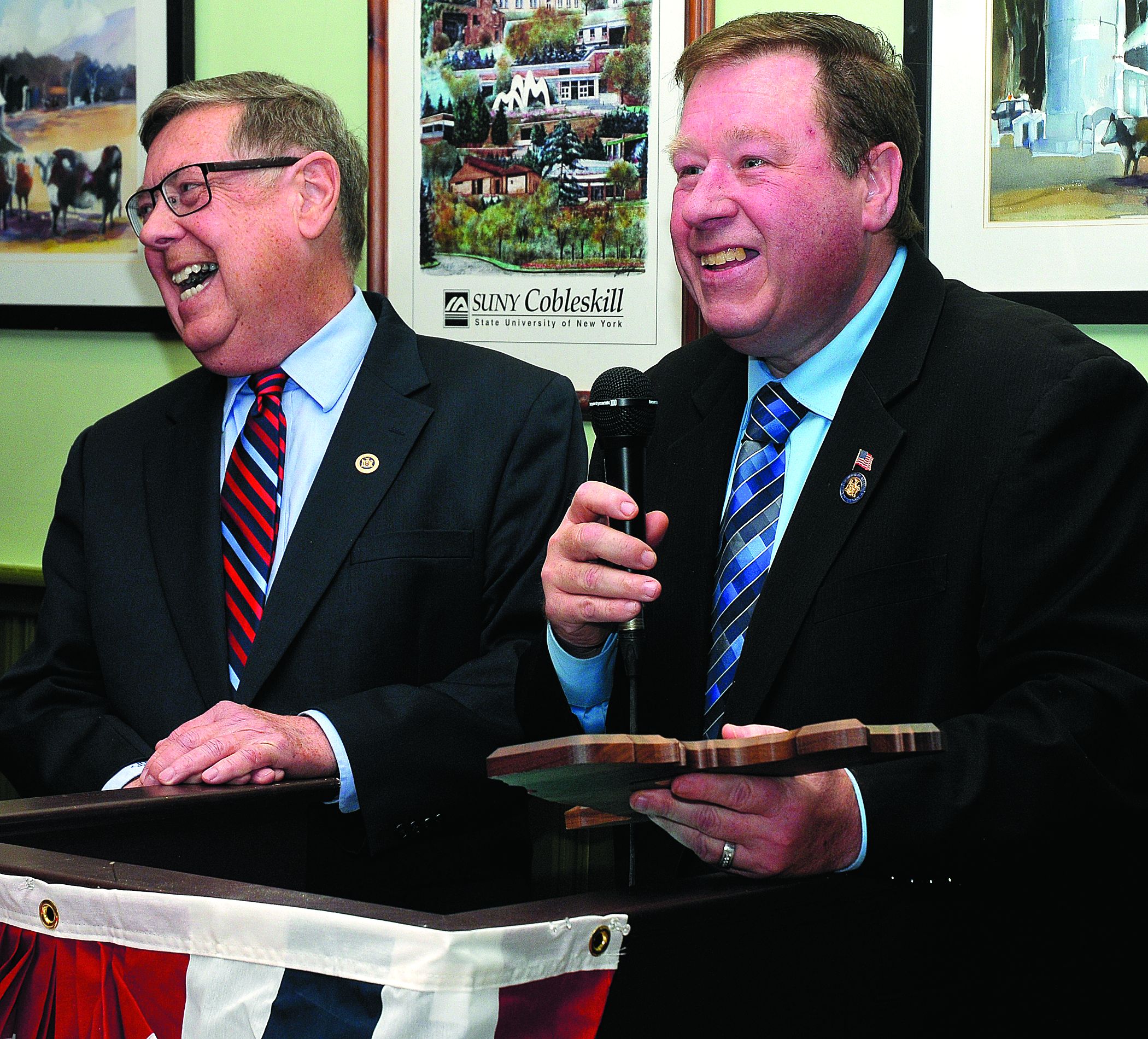 Battling cancer and a day removed from chemotherapy, Senator Jim Seward was a star Friday night.
But to Schoharie County Republicans, Senator Seward’s been a star every night.
Senator Seward, stepping down from office after 34 years, was the guest of honor at the GOP’s Lincoln Day dinner at Chieftans in Cobleskill.
Senator Seward originally planned to seek re-election this year but decided not to when doctors said the campaign stress would be too much while undergoing cancer treatments.
Friday night, Senator Seward stressed his long association with Schoharie County, and Assemblyman Chris Tague, also the county Republican chairman, did the same.
“This is our 73rd Lincoln Day dinner. Jim hasn’t been at all 73, but he’s been to most of them,” Assemblyman Tague said, to laughter.
He cited Senator Seward’s encouragement when Mr. Tague ran for Assembly two years ago, calling him a mentor––and more.
“I know you don’t like me calling you a second father,” Assemblyman Tague said.
“I don’t know about father, maybe older brother,” Senator Seward later said, drawing laughs.
He recalled his early days as Otsego County Republican chairman “in the days of Wally Wollaber,” who was then the Schoharie County chairman.
Over the years, supporting SUNY Cobleskill, Cobleskill Regional Hospital, local economic development and first responders were key points representing Schoharie County, Senator Seward said.
And there were tough times, too.
“Remember hurricanes Irene and Lee. . .” Senator Seward said. “Walk through Schoharie and Middleburgh, while people were hauling the contents of their homes out to the curb, and all you could do was hug them and say things will get better.”
The county GOP gives a Republican of the Year award––and did so this year; see page 13––but Assemblyman Tague presented Senator Seward with a Republican of a Lifetime award Friday night.
Grateful, Senator Seward said he had much help, especially from his wife Cindy and family.
“And so many people in this room,” he added. “I always considered that support to be a sacred trust.”
Other speakers praised Senator Seward’s character, including Assemblyman Will Barclay, minority leader in the Assembly.
“When you hear someone like Jim Seward speak, you know what a gentleman he is,” Assemblyman Barclay said.
“He’s respected on both sides of the aisle and throughout New York State.”
Taking a more hometown view, Senator Seward said he enjoyed representing the villages, towns and citizens of the 51st Senate District.
“All politics is local. I’ve always understood that,” he said.
“It’s been my honor to stand up for Schoharie County and this district and speak out for this county and this district.”