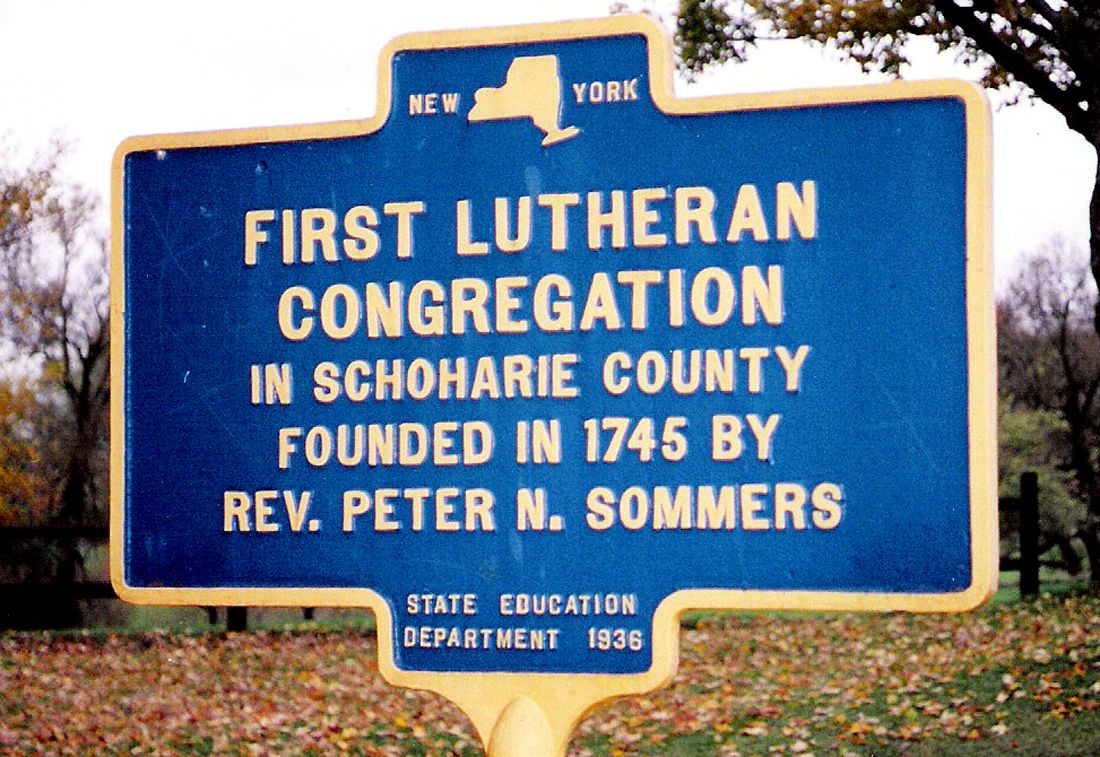 The information on the sign—“First Lutheran Congregation in Schoharie County, Founded in 1745 by Rev. Peter N. Sommers” and erected by the State Education Department in 1936—is wrong, Supervisor Sandy Manko said.
That’s because the first Lutheran Congregation was in Schoharie.
Ms. Manko is a descendant of Rev. Sommers and so she said she didn’t make the decision to remove the sign lightly.
“It means something to me too,” she said, “and it’s great to see so much interest in these historical markers. But if we know they’re wrong, we have an obligation to take them down.
“To me, they’re like a cemetery…a show of respect to the people who came before us. We need to make sure they’re right.”
Veronica Klaus owns the church—and she thought, the sign—and she’s proud of both.
“The sign’s been there for 90 years? Why now?” she said.
At the same time, Ms. Klaus said she agrees the sign should be accurate; she’s done her own research into her home and has turned up other facts a replacement sign could recognize—a step she could pursue with the help of the Town of Sharon or the Sharon Historical Society.
Ms. Manko is already onboard with that.
She said she hopes to replace the sign with another and so when it’s removed, the post will be left in place.
The sign will join a few others in the basement of the Badgley Annex at the Old Stone Fort in Schoharie. (See related story).
Ms. Manko said she’d like to see the OSF get a line in the county budget or even from the American Rescue Plan to keep an eye on and repair local signs.
The St. John’s sign drew attention after a sign at the Leesville Church on Route 20 went missing—and then was found inside, broken by weather and traffic--and volunteers stopped in front of the Beekman Mansion on Route 10 for a paint job there.
Ms. Manko is the author of several books on the Town of Sharon’s history; when she researched the St. John’s question, she said, she learned it was wrong.
The signs are in the state right-of-way.

Just a few weeks ago, members of Worcester’s Iroquois Chapter of the Daughters of the American Revolution honored Civil War hero Seth Flint, bugler for General Ulysses Grant and the last surviving witness to General Robert E. Lee’s surrender at Appomattox, with a historical marker dedicated in his honor.
Two weeks prior to that, the Cobleskill Historical Society honored Willis MacDonald, a near-forgotten physician and veteran of the Spanish-American War, with a marker at the Cobleskill Rural Cemetery.
The signs came through the William D. Pomeroy Foundation, which unveiled its Historic Roadside Marker Program in 2006.
It replaced the state’s own markers program, run by the Education Department’s State Historic Office from 1926-1966 and created to acknowledge the Sesquicentennial of the American Revolution.
Since 2005, the Pomeroy Foundation has helped fund more than 1,500 markers across the United States.
Its requirements for historical markers include providing primary source documentation, that the marker be historically significant to the community, that they include key dates, and that they recognize a historical fact that occurred from 1740-1921.
If approved, there is no cost for the signs or required grant match.
The grants are open to all municipal charities and 501 (c) (3) and non-profit academic organizations.
Often, local historians or historical societies will apply for a marker on the behalf of a property owner.
More information on the process is available at WGPFoundation.org.