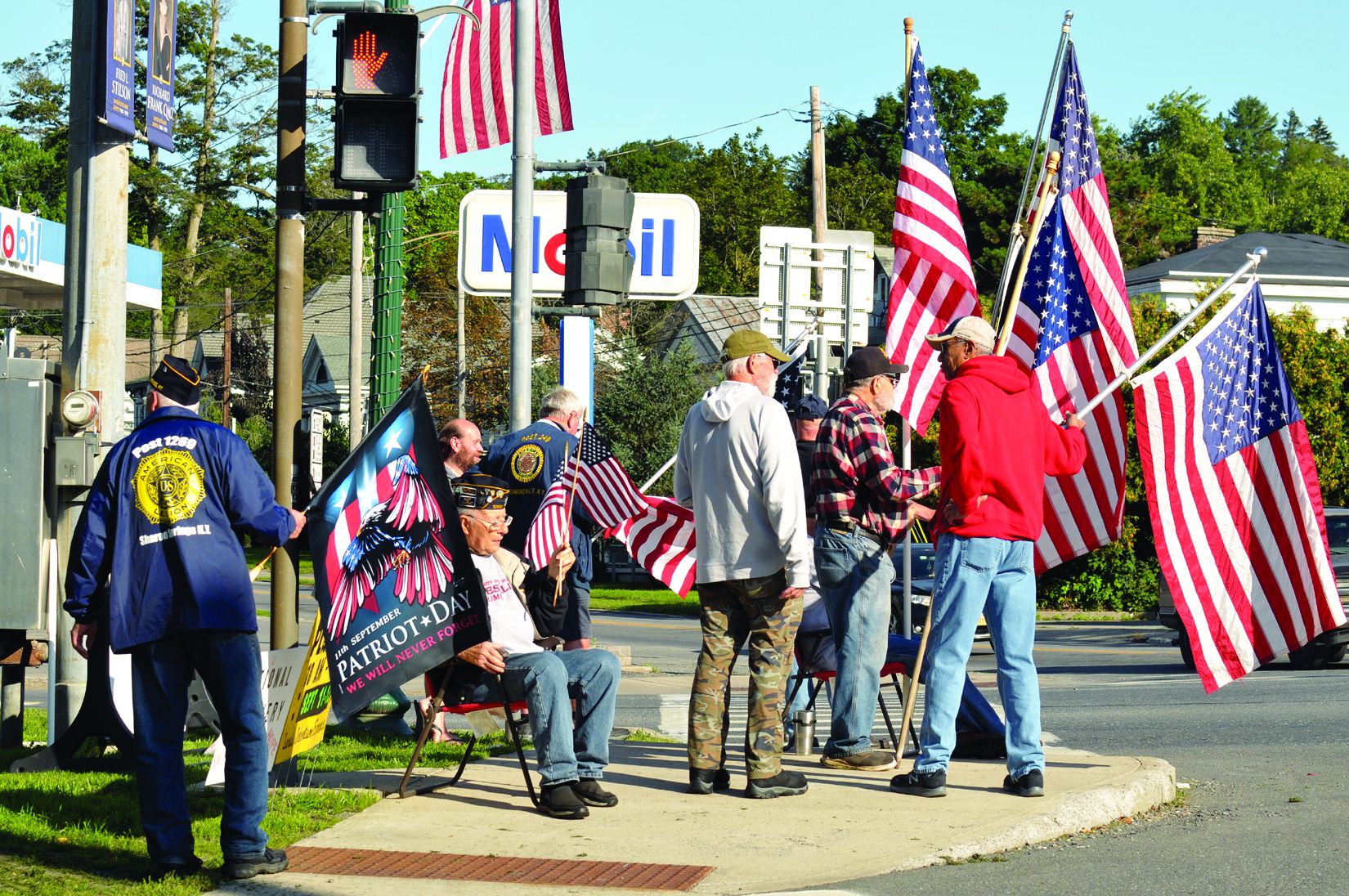 What does Johnny Cisneros remember most about the days immediately following 9/11?
The American flags.
Everywhere.
Mr. Cisneros was 22 and working as a peace officer for the New York City Department of Homeless Services Police when the City came under attack.
He doesn’t often talk about what it was like to be downtown, struggling to see—and breathe.
Or the smells or the sounds that came after.
But as about a dozen veterans marked the 20th anniversary of 9/11 Saturday, Mr. Cisneros remembered what he’ll never forget.
“My biggest memory is the flags. Afterwards, everyone was flying American flags. Everywhere—and we’re talking New York City. It was just incredible.”
As a member of the NYSDHSP, Mr. Cisneros was stationed in the Bronx.
He and a friend, Michael Robinson, were on their way to Manhattan for sergeants interviews when the first plane hit the World Trade Center.
They started checking in, and like so many others, as soon as the second plane hit, they realized it was no accident and “we flew downtown” to what later became known as the Canyon of Heroes.
“We wanted to see what we could do to help.”
Mr. Cisneros remembers the trip along FDR Drive: traffic backed up in the right hand lane, but a clear path for all of the emergency vehicles racing toward the call in the left.
The two men were about two blocks away from Deutsche Bank when they had to ditch their car—and that’s where they took shelter when the towers came crashing down around them.
“There were five pillars…you wouldn’t know that unless you were there,” Mr. Cisneros said.
“The second tower collapsed and we ran behind the second pillar. We couldn’t see. We couldn’t breathe. We formed a human chain to find each other and to get out.”
Once they did, they kept walking; firefighters offered them water to flush the debris and muck from their faces, he said, but they knew they needed to get to a hospital.
They got back in their car and headed north.
“We still had no idea what had happened,” Mr. Cisneros said.
“All we saw were people walking. Thousands of them.”
So they started piling as many of them into their car as they could, ferrying them as far north as they could go, and then heading back downtown for another carload.
Eventually, the two men got themselves to a hospital, where everyone was being triaged, and because they were “only” suffering from smoke inhalation, they were sent on their way.
In the days that followed, Mr. Cisneros was stationed at Bellevue Hospital, across the street from the morgue—with the endless stream of ambulances with blacked out windows transporting remains, and the long lines of families showing up with DNA samples and carrying photos of their missing loved ones.
One day, Mr. Cisneros said, he looked out a window to see a despondent mental health worker trying to hang herself—“It’s just a memory of the psychological horrors of the day,” he said. “It was that bad.”
Mr. Cisneros and a co-worker cut the woman down.
Another memory: the non-stop sounds of alarms going off on firefighters’ gear—an alert that another firefighter had stopped moving, trapped.
Dead.
“They were just frantic,” he said. “They felt so helpless. They were racing everywhere. And there was nothing they could do.”
That next July 4, 2002, Mr. Cisneros jokes he became a cliché: Enlisting and serving in the Coast Guard for three years.
He now works for the state and lives in Cobleskill, serving as commander of the Middleburgh American Legion and vice commander of the Schoharie County American Legion.
Among with the horrors of the day and the flags that followed, he remembers how 9/11 brought people together.
“We are starting to forget,” he said.
“People should never forget.”