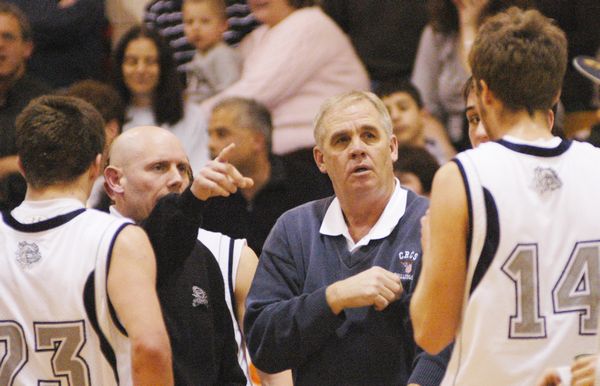 For Coach Tim Snyder, basketball ended pretty much as it began:
Tight defense, pretty good hustle and just enough offense.
That was the combination Cobleskill-Richmondville used Friday night to defeat Ravena, Coach Snyder’s final regular season game. He’s retiring at the end of this school year.
Athletes, fellow coaches and fans honored Coach Snyder before the game, which marked the end of his 20th season coaching basketball.
Included were several players from the 1998 Section II Class B champion team (see related story) along with many other past and current well-wishers.
Also attending was Don Bond, who was Coach Snyder’s basketball coach when he was a student at Cobleskill.
Athletic Director Dale Wotherspoon presented Coach Snyder with a plaque, and flowers and candy went to Coach Snyder’s wife, Sylvia.
Coach Snyder’s teams were known for defense and hustle, and those talents are what he taught from his first head coaching job with Cobleskill in 1988-89.
“We never had a player who was going to score 25 points a game,” Coach Snyder said. “Never. So the kids were unselfish for the most part and bought into working hard and playing good defense.”
Besides rarely having a big scorer, the team was often undersized and faced bigger squads in the Tri-Valley League first and then the Colonial Council.
“Even years when we weren’t very good, we were competitive,” Coach Snyder said.
Although Friday’s presentation focused on basketball, Coach Snyder’s been involved with other sports during his years at Cobleskill and C-R.
He was an assistant coach in football for 30 years, varsity baseball coach for eight and modified baseball coach for 22.
“It’s time to go,” said Coach Snyder, 58. “Let some other young guy take over.”
He’s enjoyed the run and credited past and current coaches who have helped along the way: Coach Bond, Lloyd Mott, Frank Collins, Bob Evans, Zach Shaver, Ted Pangman, Kenny Vanderwerken and others.
“I’ve been blessed to have learned from all of them,” Coach Snyder said.
“I’ve just been surrounded by a large group of talented people who think the same way and enjoy it just as much.”
And long nights in the gym still don’t bother him.
“I like the kids and enjoy the practices,” Coach Snyder said. “Coaching is teaching. It’s one of the better teaching situations because you’re in a gym with kids who want to be there. It’s been good.”