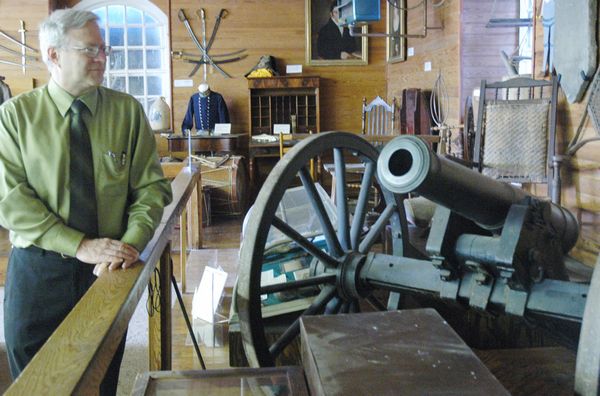 State museum officials will take away one of the Old Stone Fort’s prize possessions––a cannon from the War of 1812––in March.
Possession is the operative word, however, because even though the gun has been at the Fort for 50 years, it does belong to the state.
“We’ll give it up grudgingly but willingly to a military museum in Saratoga,” said Old Stone Fort Director Carle Kopecky.
The cannon is a bronze three-pounder, so called because it fired a three-pound ball, and sits prominently in the main display room. Inscribed on the barrel is the message “Presented to the State of New York by Governor D.D. Tompkins.”
Essential to the Fort’s collection, it resembles one British commander Sir John Johnson fired at the Fort while attacking in 1780 during the Revolution.
“The technology didn’t change much in 30 years,” Mr. Kopecky said.
He’s unsure how the 1814 gun came to the Fort. It’s not on the 1954 inventory but is listed in 1966.
It once had a label reading “donated by the Schenectady Armory,” but there was neither a date nor a specific donor listed.
“It appears that whoever donated it didn’t have the authority to do so,” Mr. Kopecky said.
“Museums have gotten a lot more serious about their record keeping. Paper trails years ago were not very conclusive.”
So the gun sat in its prized location until Michael Aikey of the state Division of Military and Naval Affairs came calling. In that position, he visited each of New York’s 504 armories; the Fort was once one of them.
About two years later, Mr. Aikey became director of the new New York State Military Museum in Saratoga and noticed that a bronze three-pounder similar to Fort’s was on the state’s inventory but wasn’t in the museum.
“The inventory describes the gun and the inscription,” Mr. Kopecky said. “There weren’t many presentation three-pounders.
“And anything that was state property remains state property unless there’s an act of the legislature.”
Mr. Aikey agreed.
“I don’t know how or why I remembered it at the Stone Fort,” he said. “I just filed it away. Even for me, the inscription makes it a no-brainer.”
So although the cannon will make its way to Saratoga, the Fort will likely get something on loan from the state collection.
“We have an extensive World War I collection,” Mr. Kopecky said. “But we don’t have a 1903 Springfield rifle. We have a German rifle, an Italian rifle, a British rifle, a French rifle, but we don’t have the standard US rifle.”
The state also has two Civil War battle flags from the 134th New York regiment, which was primarily made up of Schoharie County men.
“We’ll talk,” Mr. Aikey said. “We do loan pieces. It’s important to have these available to the public, and by loaning items, they become more available.”
Mr. Kopecky is looking forward to the negotiations.
“We’re losing our gun, but we’ve established a nice working relationship,” he said.