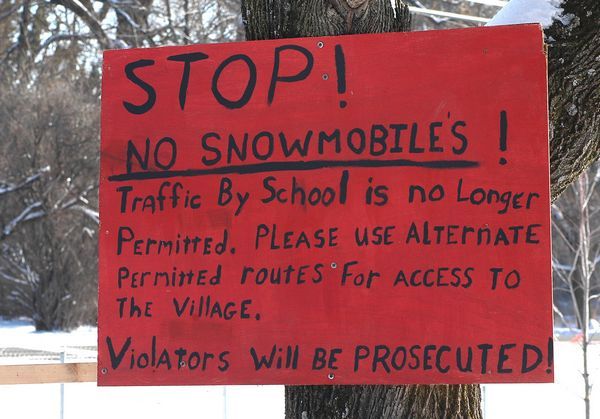 Snowmobiles are dividing the Sharon Springs community—and they’re starting with the school board.
After a tersely-worded discussion over which board members should be representing SSCS in snowmobile talks with the Village of Sharon Springs erupted into an exchange that saw pencils pointed—and tossed—board members agreed to let the sled ban stand—for now.
But, cautioned board member Alan Potter, in explaining why he was voting against Jim MacFadden’s motion to rescind the ban, it’s tearing Sharon apart.
There’s a tremendous division in our community,” he said.
That was clear Monday when school board President Karen Cookson, who offered the January motion to ban snowmobiles from the school, and Mr. MacFadden, who missed the vote, to lock horns over whether she should be involved in talks between SSCS, the village, and the Pathfinders Snowmobile Club.
Mr. MacFadden argued that as the school’s Building and Grounds Committee, he and Dr. Potter should be the SSCS reps.
Mrs. Cookson countered that as board president, she should be involved.
“Why do you need to be there?” asked Mr. MacFadden. “It’s a Building and Grounds thing. You asked for volunteers and that’s what we did.”
“It’s something a little more than Building and Grounds,” Mrs. Cookson answered.
Mrs. Cookson offered to take Dr. Potter’s spot; he said he didn’t care either way, and Mrs. Cookson agreed to let things stand.
Later, however, Mr. MacFadden offered a resolution to temporarily rescind the snowmobile ban until after meeting with the village--and then making a permanent decision on it before the start of the next school year.
“I know all you folks think you did the right thing,” he said. “You probably didn’t think that they’d be coming down the sidewalks…”
Mrs. Cookson cautioned fellow board members to “think very carefully” about Mr. MacFadden’s motion.
“It will look as if we have caved in to a special interest group,” she said, pointing out the meetings with the village are intended to address the issue as a community.
Board member Helen Roberts seconded Mr. MacFadden’s motion.
Final board member Dot Harding said she’d been under the impression that ban was temporary.
Whether the ban—passed unanimously--was right or wrong, Dr. Potter said, at least it’s gotten those involved talking, “Something we haven’t been able to do before. We’re all going to sit in a room and hash out the issues of safety and liability.”
For that reason, Dr. Potter said he was looking forward to the meetings, “but to change this motion now, it’s not the right venue to do it in.”
Dr. Potter and Mrs. Cookson voted against lifting the ban; Mr. MacFadden and Mrs. Roberts voted in favor of it.
Mrs. Harding said she, like the community, was divided.
“Over all these years, I noticed we were standing alone,” she said. “I would like to see us go through with the village talks; we are getting somewhere.”
Mrs. Harding abstained from voting, leaving it tied 2-2.
That means the ban stands, Business Manager Tony DiPace said.
“It ends there.”