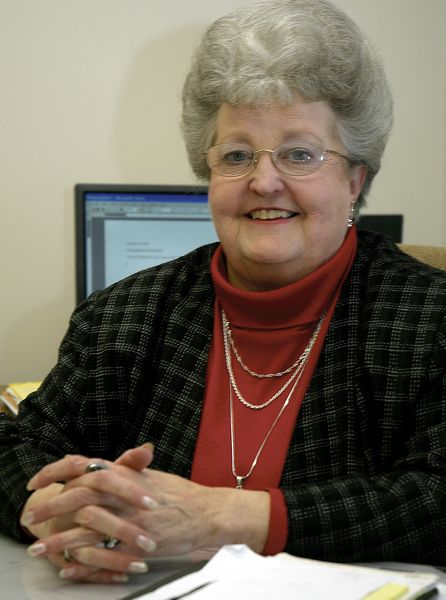 Carol Coltrain, who’s strived to help seniors and others virtually her entire adult life, is the Times-Journal Star for 2008.
The T-J gave the award to Ms. Coltrain not only for her professional work with seniors and her “second career” as pastor of the Huntersland Methodist Church, but also for her numerous volunteer efforts across 40 years.
The first week of each January, the T-J presents the Star to someone who influenced his or her community in a positive way over the past year––and sometimes, over a lifetime. Ms. Coltrain, 66, is the 17th Star.
“We had some great nominations, but Carol was a pretty quick choice,” said Times-Journal Publisher Jim Poole. ”Practically everything she does aims to help someone else.”
Helping others is a trait Ms. Coltrain learned from her grandmother, who urged the young woman “to find out what your talent is and use it for other people.”
Her talent, Ms. Coltrain explained, is taking care of people.
Born in Delaware County, Ms. Coltrain and her family moved to Middleburgh, where she still lives, when she was nine. After finishing high school, Ms. Coltrain went to college to become a teacher.
“I decided that wasn’t for me,” she said of teaching.
Ms. Coltrain became a hairdresser, but in 1969, her life took a different turn.
Many seniors, including her grandmother, had moved to the area.
“They were retired, healthy, in a new town,” Ms. Coltrain said. “It was sort of ‘What do we do now?’ It was obvious they could give something to the community.”
Ms. Coltrain helped organize the Middleburgh Golden Age Club, the second senior citizens’ club in the county. Building on that, she helped establish the county Council of Senior Citizens, and the Council in turn laid the foundation for the Office for the Aging in the early ’70s.
Continuing as a volunteer with seniors, Ms. Coltrain showed another side later in the ’70s.
The Huntersland Methodist Church had been closed for 20 years. A minister from Burnt Hills came to reopen it and asked Ms. Coltrain, who was a lay speaker with the Lutheran Church, to help.
“He was supposed to stay there but then he left for Vermont after a year. It was a set-up,” Ms. Coltrain said, laughing.
She took at-home courses over 10 years to fulfill her obligation as a pastor, and three decades later, she’s still in the pulpit.
“They’re the greatest in the world,” Ms. Coltrain said of her Huntersland congregation. “I wouldn’t trade them for anything.
“The joy of it is because I’ve been there so long, I’m baptizing children of children I baptized. I married their parents. It’s wonderful.”
Then in 1990, Ms. Coltrain’s life took yet another turn.
Her husband Joseph retired that year, and Ms. Coltrain decided she needed a job with benefits. Enjoying her work with seniors, Ms. Coltrain talked to Ethel Benninger, then director of the Office for the Aging, about an opening as a community services worker.
Ms. Coltrain applied for and got the job.
“I couldn’t believe they’d pay you to take care of senior citizens,” she said, half-joking.
Staying on at OFA, Ms. Coltrain held two other positions before taking over as director five years ago.
“I’m proud of this office,” she said. “The people here care for seniors, and that’s the bottom line.”
She’s been involved in many programs for seniors, most recently Honor Flights, which takes World War II veterans to see the sights in Washington DC, and the county’s Extended Care Task Force, which is working on long-term care for seniors.
Ms. Coltrain will continue working with both organizations, plus others.
The Task Force, which Ms. Coltrain chairs, formed after Eden Park Nursing Home closed in 2007.
Replacing a nursing home is slow and difficult work, but Ms. Coltrain remains optimistic.
“We have to get the community behind us for a nursing facility,” she said. “We’ve taken baby steps, and then all at once, everything will fall into place.”
But the Task Force isn’t looking at a nursing home alone. Ms. Coltrain argued that there’s much more than that.
“There are a lot of things we can do to make our communities more aging-friendly,” she said. “In the long run, caring for people at home––as long as it’s possible––is fiscally responsible and better for people.”
Noting that her calendar is filling up, Ms. Coltrain said she’s looking forward to retirement because she’ll be working outside the establishment.
“In some ways, I can have a stronger voice when I’m not bound by the constraints of an office,” she said.
Although Ms. Coltrain is proud of her accomplishments dating back decades, she refuses to take full credit.
“I’ve never accomplished one thing without an army marching beside me,” she said. “I may be the mouth, the vocal one, but I’ve always had support.”