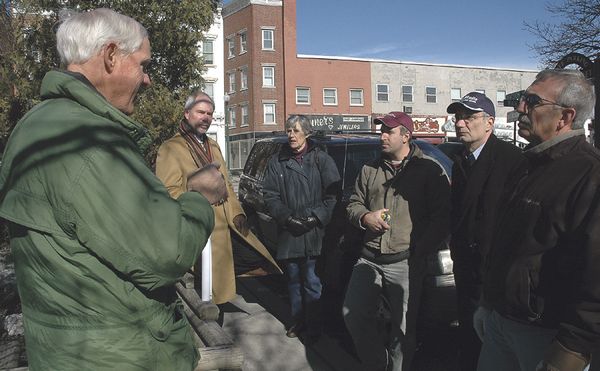 Proceeds from a concert this Saturday will help remodel and improve a Main Street block in downtown Cobleskill.
Open to the public, the concert is a classic rock tribute show at SUNY Cobleskill’s Bouck Hall Ballroom. Tickets are available by calling 255-5300.
Funds will go towards overhauling the corner of Main and Division streets by replacing a 107-foot-long strip of planters with benches, tables, landscaping and a stone wall.
Cobleskill Partnership Inc., the downtown improvement group, initiated the project, but it’s become a cooperative effort with the college, village government, the Cobleskill Rotary Club property owners Bill and Betsy Lancaster involved.
“It’s really going quite well,” said CPI President Brian Kaiser. “The college is making a huge effort, the village is on board, and the Rotary Club is part of it, too.”
The design for replacing the aged planters came from Dana Hamm of Middleburgh, a student in Steven Mullarkey’s Landscape Construction and Design class at the college.
Students will help later, too, by clearing out the planters and debris in August, according to Steve Ackerknecht, SUNY Cobleskill’s vice president for collegiate life.
“We hope we’ll be ready to go [on construction] September 1,” Mr. Kaiser said.
Besides organizing student involvement, Mr. Ackerknecht is also pulling together Saturday’s fundraiser.
There will be 20 food stations, with offerings prepared by students in the college’s Culinary Arts, Hospitality and Tourism Department.
“Students are really excited about this and working at it,” Mr. Ackerknecht said. “We have a lot of involvement.”
A cocktail hour starts at 6:30, and the live show begins at 7:30.
The band will first perform standards from Frank Sinatra, Tony Bennett and Paul Anka before moving on to Neil Diamond, Led Zeppelin, Jim Morrison and the Doors and Janis Joplin. The band’s take on the Rolling Stones will be the final act.
Tickets are limited and by reservation.
“Ticket sales are strong and there’s a lot of interest,” Mr. Kaiser said.
In addition to calling 255-5300 for reservations, tickets are also available at The Studio for Art and Craft on Main Street.