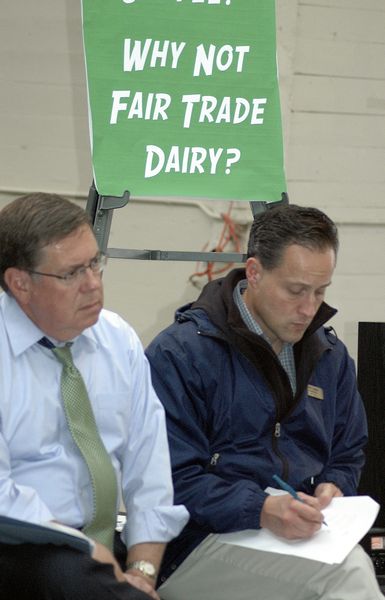 He couldn’t confirm it—yet—but minutes before he was to speak at a dairy industry rally yesterday in Cobleskill, State Senator Jim Seward got a message many fear is just the beginning:
One of the banks in Chenango County was foreclosing on six farms there.
More than 100 dairy farmers, educators, and agbusinessmen joined Senator Seward and Assemblyman Pete Lopez at the Cobleskill Fairgrounds call for action.
Since January, farmers have been receiving far less for their milk that it costs them to produce it and they’ve warned the consequences will be far-reaching.
“We’re trying to get some different ideas in front of you today,” Assemblyman Lopez said. “The old ways of doing business aren’t going to cut it anymore.”
Speaking to the need to draw consumers into the process, Assemblyman Lopez added that when he asks people at farmers markets if they’re willing to lose their local food supply, “the answer isn’t ‘No,’ but ‘Hell, no!’”
Efforts to tap into New York State’s share of federal stimulus money for dairy farmers have been unsuccessful—the money isn’t there.
But Senator Seward argued there needs to be some emergency infusion of money.
“I say we find a way to re-up the Dairy Investment Act,” which in 2006, provided $60 million in immediate assistance to struggling farmers, he said.
Susan Tillapaugh of Carlisle, married to a fourth-generation dairy farmer, warned that things are near the tipping point.
“What happens when the price paid for milk cannot sustain the expenses?” she asked.
Ms. Tillapaugh said someone once told her that the farmer’s work ethic meant “working as hard as you can for as long as you can for as little as you can.”
“Well, we have come to the tipping point of that statement,” she said. “We have become beggars working our butts off.”
Adding insult to injury, Ms. Tillapaugh said, is the fact that no one else in the industry—not milk haulers, not banks, not processors, not advertising agencies—as taking as hard a hit as the people producing the milk.
“We do not want a bail-out,” but a living wage,” she added to applause.
Other speakers included Justin Brown of First Pioneer Farm Credit, who discussed the difficulties faced by farmers and agbusiness because of the recession.
Richard Ball of Schoharie Valley Farms said the crisis is having an impact on his business and Linda Cross, representing farmers’ markets, made the case for buying locally.
Mike McCaskey from SUNY Cobleskill talked about the difficulty in attracting students to a profession so often faced with hardship and Debbie Coager of Don’s Dairy Supply, in nearby Delaware County, said her business is being devastated by the crisis too.
Heading back to the farm after the rally, a number of farmers said they appreciate the legislators’ efforts, but doubted it would have much of an impact.
“How many meetings like this have we been to since things started really going downhill? And what have we accomplished?” said one man.
“This is the last one of these for me.”
Another warned—not for the first time—that everyone’s going to “feel the pain” when farmers can’t pay their tax bills, “not now, maybe not never.”
No figures are available on what that would mean to Schoharie County.