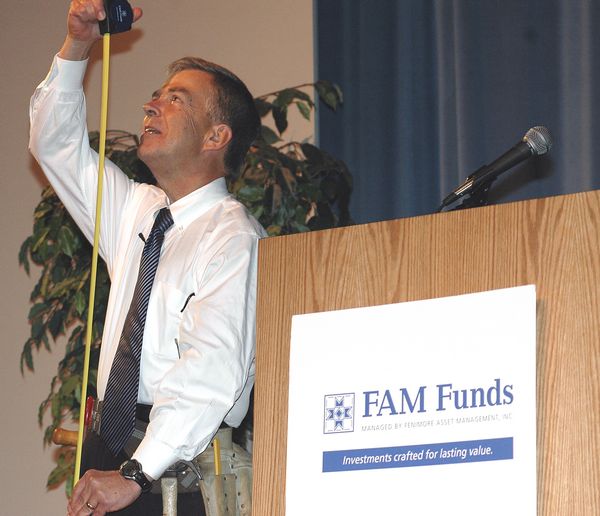 Economic indicators show hope that the recession is over, according to experts from Fenimore Asset Management.
And FAM—the Cobleskill-based investment firm with a national reputation––weathered the hard times pretty well, despite a few concerns.
Those were the messages from FAM’s annual shareholder meeting Tuesday at Cobleskill-Richmondville High School.
More than 100 shareholders heard updates on FAM’s Value Fund and Equity-Income Fund, then asked questions about investment strategies and national issues.
One of the last questions––Is the recession over?––came from emcee Jack Aernecke, and it brought positive news.
“It looks like things have bottomed out,” responded Paul Hogan, one of FAM’s co-managers.
He said industrial production has risen in two straight months, retail sales are improving and housing data indicate a recovery.
Also, he said, “$100 billion in stimulus money hasn’t hit the economy yet.
“Do we grow from here? I think so,” Mr. Hogan said. “We’re past the point where the economy is declining. If the economy is level, we’re out of it.”
John Fox, FAM’s director of research, said the worst of times came in late 2008 and early ’09.
“In October, business was okay,” he said. “In November, it was bad, and December, forget about it.”
But, Mr. Fox, added, late 2009 should be far better.
“That was a bad dropoff in ’08,” he said. “Compare it with this fourth quarter, and this one will be a lot better.
“Consumers will be alive and well in this fourth quarter.”
As for whether anything good came out of the recession, Mr. Fox responded. . .maybe.
“Probably better lending practices, and a trend towards people thinking more long-term,” Mr. Fox said. “But we’d prefer not to go through it [the recession].”
On a related question about unemployment, FAM Chairman Tom Putnam said the jobless rate usually lags behind a recovering economy.
“I don’t know when employment will recover,” Mr. Putnam said. “As the consumers come back, there will be more hiring.”
Mr. Hogan added that in a severe recession like this one, companies often lay off more workers than necessary.
Therefore, it may take a little more time than usual to get those jobs back, he said.

Another sign that the recession may be ending was the recovery of FAM’s Equity-Income Fund and Value Fund from the depths of last winter.
Mr. Putnam stressed that FAM’s investment strategy hasn’t changed. The company intensely researches good businesses with little or no debt, have good management and whose stock can be purchased at a discount.
“We adhere to strict investment principles,” said Mr. Putnam, invoking the carpenter’s adage of “measure twice and cut once” to emphasize FAM’s research.
“We want to build the right foundation for your future financial health.”
The Equity-Income Fund rebounded well, Mr. Hogan said. It’s up 18.2 percent from a year ago and up 60 percent from its March low.
A shareholder who invested $10,000 in the fund when it started in 1996 would have $23,562 now, Mr. Hogan said.
“We had a very dramatic snapback from the lows we saw,” he said.
Low stock prices offered opportunities, Mr. Hogan added.
“We were able to add companies and weed out a few companies that we thought would not weather the storm too well.”
The Value Fund also recovered from the winter low, rising 19 percent since March, Mr. Fox said.
“For people in this room, that’s significant,” Mr. Fox said.
The Value Fund has shares in 23 companies.
“We’re not buying a lot right now, but we’re looking at a lot of ideas,” Mr. Fox said.
Mr. Putnam closed the Fund discussion by reminding the audience of three tenets:
• “Never forget the benefits of the financial strength of a company.”
• “Don’t get too enamored with companies that try to grow step by step with other people’s money.”
• “Ask yourself constantly, ‘What can go wrong?’ ”
“These three items are good to remember, especially in good times, when you tend to forget about the bad times,” Mr. Putnam said.