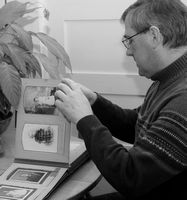 A century-old Burtonsville-area photo album is going home.
Or at least close to what was probably home.
The Times-Journal is giving the album, which contains about 20 portraits and family photos from the early 1900s and before, to the Esperance Historical Society.
Heather Johnson, a retired Cobleskill-Richmondville teacher, bought the album at an auction about five years ago. Although she had no ties to the Goewey, Winslow and Gordon families in the album, Ms. Johnson feared the book would end up in the trash.
In December, she brought the album to the Times-Journal, asking for help in finding descendants and a worthy owner. And Ms. Johnson said the T-J could decide who would receive the book.
Two news stories, with photos from the album, generated interest among descendants, genealogists and historians.
The second story, published a month ago, still sparked responses weeks later.
Henry Bray, director of the Sloansville Cemetery, printed a family tree and noted that many people in the album are buried in that cemetery.
Cobleskill attorney Craig Morlang, who researches genealogy while working on estates, found more family information.
“I used to ski a lot in the Burtonsville area,” Mr. Morlang said. “I saw a lot of those names [in the album] on mailboxes, and I was just interested.”
The families in the album lived in the Sloansville and Esperance area of Schoharie County and in adjacent Burtonsville in Montgomery County.
Seeking to find the album an appropriate home, T-J Publisher Jim Poole said a historical society seemed the right fit..
“Although descendants were interested in the album, nobody was clamoring for it,” he said.
“Some people, however, want copies, so I think it was appropriate to give it to a historical society, where everyone has access to it and can get copies.”
Mr. Poole gave it to Kenneth Jones, president of the Esperance Historical Society, on Saturday.
Glad to have the album, Mr. Jones said that in some respects, it’s unusual.
“In some of these old albums, the people aren’t identified, so they’re not much help,” he said. “In this one, they’re named, so you can follow it.”
Ms. Johnson is glad to have the album go to the historical society but lamented that one of the families had to let it go.
“The question is how this landed in an auction,” Ms. Johnson said. “That’s a question we’ll never answer, I guess.
“But I’m glad people will have access to it, and I thank all the people who came forward with information. They were great.”
Mr. Jones said he could make digital or hard copies for those who may want them. His number is 875-6854.