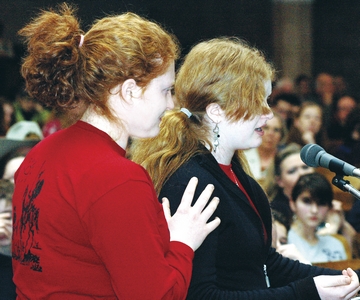 Even as speakers urged them to be more careful in budget cuts, Cobleskill-Richmondville school officials unveiled more proposed reductions in the 2011-12 budget Monday night.
Board members and several in the audience of 300 also urged another strategy as C-R grappled with its budget crisis: Reach out to Albany.
Speakers addressed the board for more than an hour about the cuts proposed two weeks ago. (See related story.)
But those cuts account for only half of the $4 million C-R is seeking to eliminate from next year’s spending.
Superintendent Lynn Macan outlined a new round of proposals Monday night:
• Teacher-leader positions, professional development, textbooks and a cut in summer school, $81,000.
• Sports uniforms, referees, sports transportation, $49,000.
• Not replacing an elementary counselor and replacing a full-time social worker with a part-time one, $145,000.
• Reduce cleaning positions, adjust health insurance, summer school transportation, $401,000.
Added to the reductions announced two weeks ago, the total cuts are now $2.2 million or 55 percent of the $4 million, Ms. Macan said.
“That’s an awful lot of cutting to get to 55 percent,” she said. “There’s still more to do.”
In one change from two weeks ago, she recommended returning indoor track to the budget and instead cutting boys’ and girls’ tennis. There would be no dollar change in the switch, Ms. Macan said.
Items still to be looked at include transportation, reductions in materials and supplies, overtime, staggered shifts for employees and limiting evening and weekend activities.
Also, Ms. Macan said, board members are looking at using some of C-R’s fund balance––money carried over from previous years––to ease the tax burden.
There was no mention of possible cuts in administration or renegotiating contracts with unions, two topics touched on by speakers.
But board members did recommend contacting legislators and Governor Andrew Cuomo to restore school aid.
Several board members met with Senator Jim Seward and Assemblyman Pete Lopez to suggest just that.
Heavily dependent on state aid, Schoharie County school districts have the second-largest cut per student in the state, board member Howard Rickard said.
“We understand the state’s in trouble,” Mr. Rickard said, “but we’d like to have fair and equitable cuts.”
And, he added, all districts would benefit from mandate relief and health-care reform.
“Only if the legislature acts on that can we get relief,” Mr. Rickard said.
The back of the meeting agenda sheet, distributed to the audience, had addresses of legislators and the Governor and offered suggestions about what to say or write:
“Tell them a story––include student words, photos, examples of successes, school/community pride––personalize your communication as much as possible.”
Board member Rose Surman made a final appeal for community lobbying.
“Please contact your legislators,” Ms. Surman said. “It will be helpful for them to know how much pain we’re feeling.”