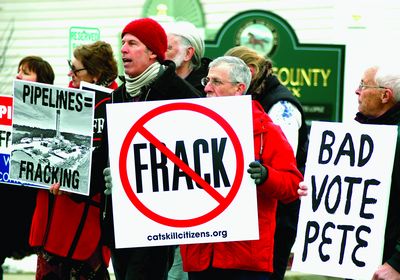 Chanting "Pete Lopez, take a stand, be a steward of the land," and "Bad vote, Pete," two dozen fractivists staged a demonstration outside Assemblyman Pete Lopez's Schoharie office Monday, protesting his vote against a two-year state moratorium on hydrofracking.
The Assembly is in session; Assemblyman Lopez was in Albany.
In what's being called a largely symbolic move, the Assembly last Wednesday voted 95-40 in favor of the moratorium.
The state Senate is unlikely to pass its own moratorium, and even in his own house, Assemblyman Lopez said it's policy-not law-just one of the reasons he voted against it.
"I understand their passion and their frustration and I try not to take things like this personally," Assemblyman Lopez said of the protest.
"It's an emotional issue. But this is a process and we're still in the process."
The process Monday included blasting Assemblyman Lopez for [having] "...danced, equivocated and failed again and again to take a meaningful position, preferring to defend himself, insisting he is concerned, insisting he is a steward of the land and insisting that he would only support fracking if it could be done safely," Bob Nied of the Center for Sustainable Rural Communities read in a prepared statement.
"The residents of this region no longer wish to be Assemblyman Lopez's dance partner..."
In addition to CSRC, the protest was organized by Stop the Pipeline, Sharon Springs Against Hydrofracking, and Concerned Citizens of the 102 Assembly District..
Assemblyman Lopez said Thursday that he's voted for fracking moratoriums and health studies in the past, but this time, the Assembly was just casting its net too wide.
The moratorium, he said, didn't only address high-volume hydraulic fracturing in the Marcellus and Utica shale, but low-volume vertical wells in western New York, where wells have safely been delivering natural gas for 30-40 years.
"We need to make sure our actions are consistent and factual," he said. "The moratorium would have had an impact on wells that have had no issues...It was over-reaching."
The Assembly measure cited concerns about drinking water and climate change and the handling of chemically treated water that's generated during drilling.
It also requires a SUNY public health school to conduct an independent health study.
Assemblyman Lopez said he's been vocal about all of those issues.
As a member of the Assembly's EnCon Committee, he said he supports the US Geological Survey's call for additional groundwater maps before any final decision is made on fracking as well as DEC's own argument that more needs to be done with requirements for well casings.
"If hydrofracking is going to be permitted, it needs to be with the most complete information we can find," he said. "And there's still a lot of information that needs to be collected. I understand the emotions is this. It's an emotional issue. But this is just a policy statement; it's not a law."
Can fracking be done safely?
Assemblyman Lopez said he's still looking for the answer to that question.
"Can there be significant safeguards? If we allow it, at what intensity? The stakes are enormous," he said. "Our groundwater is a precious resource; none of us want to destroy that.
"But is this an opportunity that allows us access to cleaner energy? And what does that mean for our community as a whole? Those are the questions I'm asking."