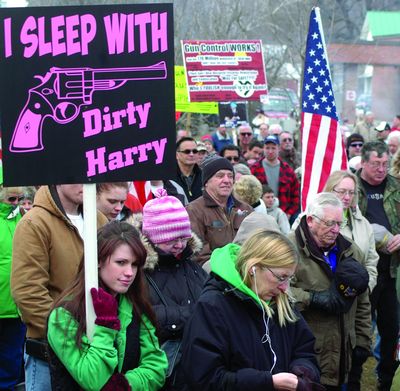 Their anger at what they see as over-reaching by the government keeping them warm under icy gray skies, as many as 2,000 anti-Cuomo, pro-gun protestors gathered on the front lawn at the Schoharie DAR Saturday in a We The People rally.
A Tory hung in silent effigy, patriots dressed in furs and camo waved signs swearing allegiance to Dirty Harry and the Second Amendment-and against the "Un" Safe Act-and music from Simon and Garfunkel, Johnny Cash and the Dixie Chicks reverberated through downtown Schoharie as speaker after speaker vowed to hold onto their guns no matter what.
Carlisle Supervisor Larry Bradt was instrumental in putting together the rally, organized after supervisors in February blasted the NY SAFE ACT, Governor Cuomo's reaction to the murders at Sandy Hook Elementary School in Connecticut.
Friday, supervisors took that a step further by vowing not to spend a dime enforcing it.
"We're not asking anyone to repeal this law, we're demanding it," Mr. Bradt said to loud applause Saturday.
"People in Albany must listen."
Though Mr. Bradt said he feels terrible for the families impacted by not only Sandy Hook but by Christmas Eve shootings in Western New York and last Wednesday, Herkimer, he blamed those deaths in part on the fact that "we're closing down our prisons...we have to keep these people locked up."
Schoharie Mayor John Borst said it's no coincidence that his village was the breadbasket of the Revolution, banded together to survive Hurricane Irene, and is now Ground Zero for the right to bear arms.
"We have a history of helping each other...starting with the Revolution," he said.
"I look out over this crowd and see history repeating itself."
Patrick Stearns of Amsterdam and Hank Wahlers of Middleburgh were two of those comparing notes before the rally began.
Both said they fear the SAFE ACT would keep them from passing down guns long in their families to their children and grandchildren.
Mr. Wahlers is a member of the Oath Keepers, a military group that refuses to obey orders they believe violate the Constitution. He plans to pass on his guns to his seven grandchildren and 12 great-grandchildren "no matter what the blowhards say."
With family that's fought in every war since the Revolution, "I'll be damned if they're going to take my firearms away," he said.
Mr. Bradt said the money needed to enforce the SAFE ACT would be better spent on things like schools and flood recovery; Schoharie Supervisor Gene Milone agreed.
"It's our taxes that are going to pay for its implementation," Mr. Milone said. "These unfounded mandates must stop. We still live in a democracy. Our voices have a right to be heard."
Other speakers Saturday included Assemblyman Pete Lopez, Senator Jim Seward, County Clerk Indy Jaycox, Ray Zeh of the Schoharie County Conservation Association and Sheriff Tony Desmond, who vowed to support local gun rights efforts.
As a veteran, Sheriff Desmond said, he and the other vets in the crowd "served around the world to provide freedom for others.
"Now, sadly, we must stand in our own country...I will stand with you to do this."
Mr. Bradt said afterwards that it's important to keep the rally's momentum going by joining with other groups to pull the $32 million included in the proposed state budget to enforce the SAFE ACT.
"If we can't do that, we want it appealed ASAP. Fifty-two out of 60 counties and a majority of people oppose this. I'd call that a super-majority.
"It should g back to the table. We're not necessarily opposed to additional regulations. But let's sit down and do it the right way."