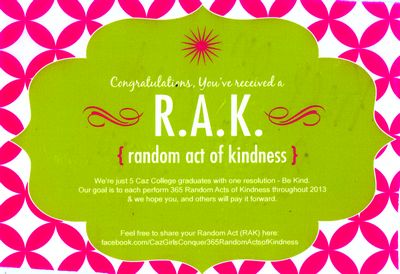 Convinced there's more good in the world than evil, a group of Cazenovia College friends, including Trista (Porn) Bradt from Cobleskill, has launched what's quickly becoming a worldwide effort to prove it.
Calling themselves Caz Girls Conquer 365 Random Acts of Kindness, the five graduates made a New Year's pact to each do something kind for someone every day for the next year.
They've created a Facebook page to document their efforts and spread the word a June BBQ at Noble Ace Hardware will help fundraise for their even farther-reaching Greater Acts of Kindness.
Ms. Bradt is part of what the girls are calling the Kindness Crew-Ashely Agresta, an Amsterdam native who now lives in Concord, New Hampshire; Kristin Burger, from Long Island, Chelsea Kennedy from Schenectady, and Jessica Johnson, who's from Colonie and now lives near Syracuse.
The idea to dedicate a year to the random acts-RAKs-was Ms. Agresta's; she launched it to honor the Sandy Hook Elementary victims and Ms. Bradt said the other girls quickly signed on.
"I've always been the kind of person to hold the door for people and to go out of my way to say thank you for great service, but this was one way to be part of something much bigger," Ms. Bradt explained.
"Already, it's been amazing. Twenty-four hours after starting the Facebook page, we had 300 people with us. After 48 hours, we heard from someone from Austria. It was crazy."
Ms. Bradt explained that RAKs are intentionally very small; a scratch-off lottery card left in a cart at Wal-Mart or on a truck driver's windshield at a rest stop is just one possibility.
So are a couple of envelopes with $1 in them for movie snacks left at the Park Theatre candy counter.
People who commit-or receive--RAKs because of the Caz girls are invited to post about it on their Facebook page-www.facebook.com/CazGirlsConquer365RandomActsOfKindness--and on their second day Ms. Bradt said they heard from a Cobleskill graduate living in Texas who'd read of their efforts and was inspired to cover someone's co-pay at the doctor's office.
"Buying coffee for someone who's driving you crazy...even just taking the time to say thank you," she said. "It all adds up, especially when people pay it forward."
Because in the real world, sometimes it's hard to make time for a RAK every day, Ms. Bradt said they allow themselves to skip days when they need and just make it up when they can.
"The other day I did five in one day," she said.
In addition to their daily RAKs, the Caz girls also do Greater Acts of Kindness-GAK-as often as finances allow.
In January, they heard of a friend of a friend of a family in Wyoming having a tough time financially because their seven-year-old was being treated for cancer.
They collected donations through their fundraising page, which is linked to their Facebook page, added to it themselves, and were able to anonymously send the family a gas card and gift cards to use at Wal-Mart and Applebee's.
For their efforts they got a heartfelt thank you on their Facebook page.
"We want people to know kindess is free," Ms. Bradt said. "It's fun to watch someone's reaction...I think sometimes we get more out of it than they do.
"We believe there's good in the world. Sometimes it's just too easy to get lost in the bad stuff."
To help the girls spread their work, like them on Facebook or email them at Cazkindness365@gmail.com-and then follow their lead.
"Kindness is contagious," Ms. Bradt added. "When 365 days are over, we hope we'll have made kindness a lifestyle for more people."