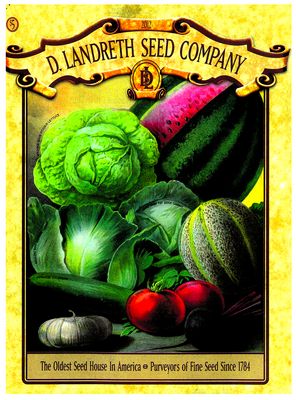 When they had time to kill from the Constitutional Convention, George Washington and Thomas Jefferson swung by to shop there and now you can too:
The D. Landreth Seed Company, founded January 7, 1784 in Philadelphia, Pennsylvania, is moving "lock, stock, and barrel" to Sharon Springs.
Landreth owner-and rescuer-Barbara Melera said Thursday the historic seed house is moving into the former Thunder Customs building on Route 10.
Right now, they're leasing the space with the right to purchase it, something Ms. Melera said they expect to do in December 2014 after a lawsuit involving investors is finally put to bed.
Ms. Melera said the building will house a small but impressive retail space, but most of it will be used for their mail-order seed business.
A former venture capitalist and lifelong gardener, Ms. Melera bought Landreth Seed, which had fallen on hard times, in 2003.
Her husband, Peter, grew up in Sharon Springs, where they have a house, and their plan was always to retire here.
Since no one can really afford to retire anymore, Ms. Melera joked, they're moving here fulltime and bringing the business with them.
Landreth's history mirrors the nation's with Washington and Jefferson among its first customers in the late 1780s.
Landreth introduced the first zinnia seeds, introduced Americans to the first white potato in 1811, and in 1833, stopped doing business with slave owners.
Landreth illustrates it catalogs and seeds packets with images from a collection of original catalogs that dates back to 1839 and it's from those catalogs-and living with them for 10 years--that Ms. Melera has gleaned facts like this; a friend who works at the Smithsonian told her it's the only collection of its kind in the world.
"There used to be thousands of stores like this," she said. "Little businesses like this built this nation-that's why it's been so important to save this company. There's nothing like it left."
Landreth sells about 900 varieties of seed and all but a half-dozen of them are heirloom.
There's a growing interest in heirloom plants that seems to be sustaining itself, Ms. Melera said, in part because the price of gas is making it more economical to grow your own food. People also want to be able to save their seeds.
"When people walk in the door...they're never going to have seen so many seeds in one place," she said.
"And in the fall? No other company sells so many garlic varieties."
It's that garlic that has Ms. Melera especially excited: While most of their seeds come from the Pacific Northwest, they've begun contracting with Schoharie County farmers for many of the 40-plus varieties of their "very, very exotic" garlics.
Landreth has had a presence at Sharon Springs' Garden Party and Harvest Festivals since they began and Ms. Melera said the community's gone out of its way to welcome and help her, especially realtor and Planning Board member Mary Ann Larkin and County Industrial Development Director Ron Filmer; the IDA owned the building after Thunder Customs closed.
"I've been blown away," she said. "You know how they say an old house has 'good bones'? Well, Sharon has good bones. We'll pay them back a million-fold. They don't know that now, but they will."
Local crews have been helping Landreth make the move to Sharon where workers are stocking shelves even as the shelves themselves are being built.
From January to June, when they're working flat out, is their busy time, Ms. Melera said. Then it stops till the end of August, when orders for garlic and bulbs start coming in.
"We'll be ready," she said.