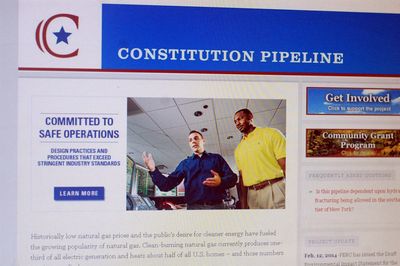 The Federal Energy Regulatory Commission has ruled that Constitution Pipeline's proposed project through parts of Schoharie County would have a "less than significant" environmental impact if promised mitigation steps are followed.
In its draft environmental impact statement issued Wednesday for the Constitution Pipeline and Weight Interconnect Projects, FERC found they would "have some adverse environmental impacts, but these impacts would be reduced to less-than-significant-levels."
FERC will accept public comments on the draft EIS until April 7 and plans to issue a final environmental impact statement for the project on June 13.
Final approval could come September 11.
Constitution is celebrating FERC's decisions even as opponents are kicking their efforts to stop it into high gear.
"We're very pleased with the findings," Constitution sponsors said in a written statement. "This is a significant milestone for the project.
"We look forward to...the final Environmental Impact Statement this summer. We are committed to working to ensure that the Constitution Pipeline is constructed in a responsible, environmentally-sensitive manner..."
FERC's DEIS looks at project impacts on things like erosion, wetlands, and wildlife, but draws far different conclusions than groups like Stop The Pipeline and the Center for Sustainable Rural Communities have using their own data, said Bob Nied of Richmondville, a director of both.
"It's crunch time for us," Mr. Nied said. "We have our own scientific data and we have our own studies and reports. There hasn't been a place in the review process for them before, but we've got our heads down now. We'll see whether FERC listens."
Mr. Nied called local opposition to the pipeline-half of the impacted landowners in Schoharie County have refused to grant access easements and in nearby Delaware County the figure is even higher-"the elephant in the room".
"If people aren't giving permission for Constitution to cross their land, how can FERC know what the final route will be?" he said. "And if you don't know what the final route is, how can you assess the environmental impact?"
Considering that resistance, Mr. Nied said they were a little surprised by the tone of the DEIS.
He also said they're not ruling out the possibility of lawsuits.
"We see this as an opportunity to put our cards on the table," he added. "And we think we have a pretty good hand. "
FERC will conduct four public comment meetings on four successive dates, beginning Monday, March 31 at 7pm at the Cobleskill-Richmondville High School.
The April 1 hearing will be held at the Oneonta High School, followed by an April 2 hearing at the Afton High School, and an April 3 hearing at the Blue Ridge High School, New Milford, Pennsylvania.
All hearings begin at 7pm.