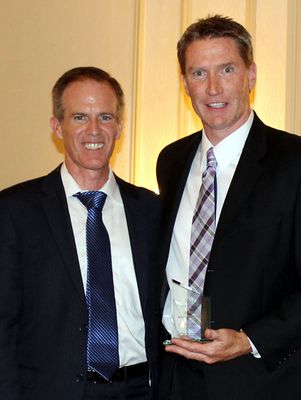 The Middleburgh Telephone Company congratulates company president Jim Becker, on recently receiving the Extraordinary Broadband Leadership Award at the Third Annual New York State Broadband Summit.
The 2015 NYS Broadband Summit brought together more than 350 broadband stakeholders from New York and around the country to forge partnerships, discuss policy issues related to broadband deployment and adoption, and to hear best practices from nationally recognized broadband leaders and elected officials.
The Extraordinary Broadband Leadership Award is presented to an individual or company that has provided a major influence on the direction and success of broadband development in New York State.
Mr. Becker served as president and CEO of ION, a statewide fiber network developed by a consortium of independent telephone companies, including MIDTEL, from 2006-2013.
He is also currently the president of INOC Datacenters, a datacenter and broadband services company with two locations in Albany.
Mr. Becker was selected for the award for being instrumental in bringing several large projects to fruition in order to expand broadband services to many rural areas in New York State.
He spearheaded ION's 40 million dollar project to bring broadband services to rural areas with federally funded programs.
He is currently working with Schoharie and Otsego Counties, through MIDTEL, to expand broadband access to unserved and underserved areas.
He has also been a valuable source of information and guidance to the New York State Broadband Program Office and the New York State Telecommunications Association, where he serves as Chairman.