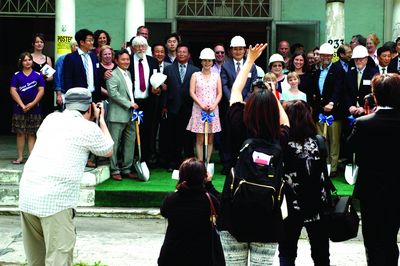 You can't blame Sharon Springs for being a little giddy.
Or a lot.
After all, Wednesday's groundbreaking in the doorway of the Imperial Baths was easily a decade in the making.
And though there were, as Mayor Doug Plummer pointed out, some crazy ideas and developments along the way, "It's time to get this project started."
More than 100 Sharon Springs residents packed the foyer of the Baths to hear SSI's Kevin Lee, project manager, trace the project's timeline from March 2008 to May's site plan approval by Sharon's Joint Planning Board.
"Today we celebrate beginning construction," Mr. Lee said.
Though actually, construction has already begun at the rear of the building, something an enthusiastic Mr. Lee pointed out afterwards as he led guests on a tour of the grounds.
SSI President Kyu Sung Cho was equally enthusiastic, as he explained the project and what it will mean to Sharon Springs and beyond.
In a nutshell, SSI plans to invest $9.1 million to renovate the Imperial Bath & Spa, part one of a project that will eventually include the Columbia Hotel and Adler Hotel. (See related story on page x.)
No one was more enthusiastic than Mayor Plummer, however, who asked the crowd, "Is this not so incredibly excellent?!"
"I'm proud to say I've been a staunch cheerleader for the project for the past eight years," Mayor Plummer said.
"This will put people back on Main Street. None of it would have happened without the hard work and support of so many of the people in this room. I'm so proud of us all."
Mayor Plummer urged the crowd to go with Mr. Lee on his tour around the building.
"You really want to see it now, because you're not going to believe it later."
Most of the crowd took the Mayor's advice, following along as Mr. Lee used photographs displayed on easels along the route to explain the concepts behind the project, which will include indoor and outdoor saunas and baths, massages, and a restaurant.
The spa is intended as a relaxing escape, Mr. Lee said, and its design will incorporate much of the Baths' history and architecture.
The 100-year-old boiler and chimney along Brimstone Creek will be retained and enclosed in glass with an outdoor fireplace adding to the ambiance and a Korean-style restaurant with a glass wall will also allow diners to look down on the creek.
Mr. Kim also told the tour that a waterfalls on the north side of the property will be uncovered when foliage is neatened up.
Construction is slated to run through December 2017.