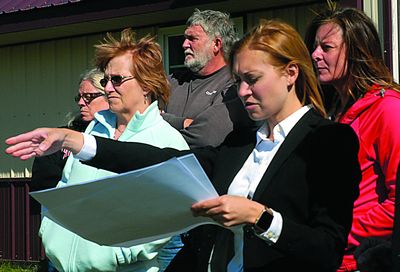 A quarter-mile of sidewalk may be a stumbling block for the proposed Dollar General in Richmondville.
The sidewalk is "an important component" of the project, village planning board members said Monday, but Dollar General may be unlikely to pay the full cost.
Monday's discussion came with Katy Mangan of the state Department of Transportation at the meeting via speaker-phone. The meeting followed a Thursday public hearing at which many residents spoke in favor of the store.
At some point, the planning board will make a recommendation to the Richmondville Village Board about the store.
Dollar General proposes to build the store on Route 7, across from the Richmondville Volunteer Emergency Squad building.
There's been some concern about how pedestrians would reach the store. Board member Dennis Shaw said children might be walking from the village pool or Radez to the store.
Board members agreed that if there was a sidewalk, a barrier and guard rail would be necessary, too.
Ms. Mangan suggested asking "the developer for the sidewalk."
Planning board members said the Route 7 shoulder is 12 to 14 feet--plenty wide enough for a sidewalk without cutting into adjacent property.
"It might be good to have the sidewalk now" if there's going to be more development there, Ms. Mangan said.
Caryn Mlodzianowski, an engineer representing Dollar General, said developers would donate $10,000 in escrow "for a future sidewalk."
That amount would pay for more than Dollar General's Route 7 frontage, Ms. Mlodzianowski added. It would not, however, pay for the entire sidewalk.
Ms. Mangan, planning board Co-Chair Linda Carpenter and Shane Nickle of the county Planning and Development Agency will meet at the RVES building at 2pm Friday to discuss the sidewalk and other issues.


Thursday's hearing had Ms. Mlodzianowski and Rob Neill of Primax Properties first outline the project.
Mr. Neill said the store would create eight to 12 jobs, and "history says" it would generate $25,000 to $30,000 in sales tax.
The property assessment, he added, would be about $500,000.
"This is a benefit coming to the community," Mr. Neill said.
Paul Sawyer, whose home is next to the property, sad he favored the property but was worried about water runoff from the parking lot.
"By design, this will lower the rate of runoff," Mr. Neill said, and Mr. Sawyer said he was satisfied.
Other speakers said they liked the proposed store.
"Upstate New York is an incredible place to live except we don't have commerce, we don't have jobs, and we don't have tax revenue," said George Konta.
"Dollar General will bring all those things."
Longtime resident Gail Bender said Richmondville has little or no business now.
"I've never seen the village as dark and dismal as it is now," she said. "We need the business."
Only Posie Shaw spoke against the proposal, arguing that "it will change the face of Richmondville forever.
"One reason I live in this area is because we don't have places like that," Ms. Shaw added.
Horst Fierek responded that Dollar General is at least a beginning.
"Twelve jobs are better than none," Mr. Fierek said. "This store will help the community. Start small, maybe something else will come.
"There's no future for Richmondville if we keep going the way we're going."
The planning board will meet again June 29 at 3:15 pm, "and we'll come close to a decision," planning board Co-Chair Diana Spenello said.